Please select the correct P&P option for your region (Ireland, EU/UK or ROW) 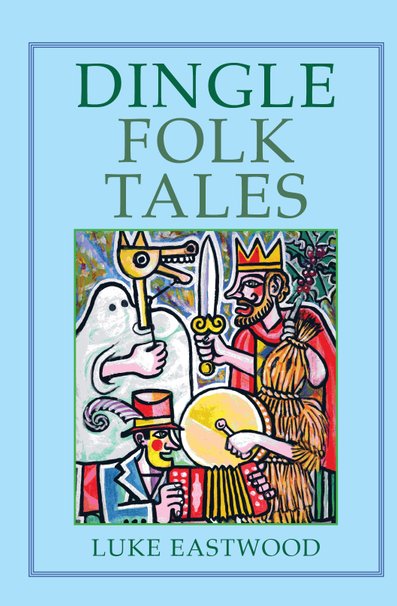 Available at bookshops and all the usual online outlets

This new collection of folk tales covers the pre-Christian era of magic and mythology right up to Fungie the dolphin, of modern times, with 49 stories from many time periods. This anthology has been compiled over 2 years from local people, ancient books, the Dúchas Schools’ Collection and also exclusive interviews with individuals directly involved in some of the stories - from all over the Dingle peninsula.

Many of the stories, that were in an antiquated or difficult to read style have been completely rewritten in modern English, as well as a couple that have been translated from Gaeilge (Irish) the language spoken on the western half of the Dingle peninsula. The collection also includes a complete original translation of “The Battle Of Ventry” from 1885.

"Holds a treasure trove of myth, legend, and (often tragic) history of what events helped sculpt Ireland into the nation that it is today. Each story is engaging and they’re easy to breeze through. Verily, when reaching the end of each tale it is quite easy to continue on.
“Just one more story then I’ll take a break...” and then I keep reading. A good number of these are even perfect as bedtime stories for your kids and grandkids (but read through them
beforehand). Practice your Gaelic and read tales to them such as 'The Cailleach of Corca Duibhne' or 'The Lament of the Fairies'... Preserving these legends for future generations is essential in the twenty-first century, and this book helps them live on." CORD magazine

"Eastwood weaves a rich mosaic of Tales thatnot only touch on the antiquity of this place but include accounts running up to the very recentpast. One moment you will be reading a tale offairies, leprechauns or witches drawn from therich oral traditions, then you will turn the page toread the story of Fungie the dolphin, who was afamous resident of Dingle harbour from  1983 until 2020. Although the subject of this book is not directlyrelated to shamanism, its themes of magic and ties to ancient cultures are topics that areof interest to many of us on this path, not tomention those of us with a fondness for theEmerald Isle itself! Indie Shaman magazine

..he has brought together history and tales from all across the Dingle area, from top to bottom, and ranging from the dim and distant past, right up to the current times. Over the course of the book, Luke sheds light on many a topic including a chapter on the last knights of Kerry and Rathinane Castle, the wren boys of Dingle, the Dunquin catastrophe and the Battle of Ventry, to name but a few. The Kerryman

Eastwood’s collection is both comprehensive and wide ranging, and are retellings of older tales and more recent ones. There are tales that read like history lessons, including one of feuding, rebellion and the end of a local dynasty in the time of Elizabeth I; what happened during the Potato Famine; a tale of a native Arctic and Antarctic explorer; a medieval brooch; and fascinating tale of intrigue daring by a local man to save Marie Antoinette and bring her to Dingle, which failed. The book ends with a long involved tale concerning the Battle of Ventry I found them well paced and held my attention throughout. This collection would appeal to anyone who are interested in folk tales, particularly in Irish folk tales, or who have ancestry traceable to the southwest corner of Ireland. The Druid Network

A new book from a very accomplished author covers the pre-Christian era of magic and mythology in Dingle right up to the modern day influence of Fungie the dolphin. Killarney Today