Through The Cracks In The Concrete The Wilderness Grows 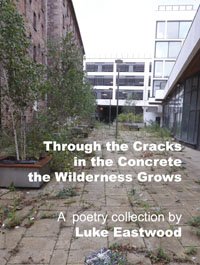 Please select the correct P&P option for your region (Ireland, EU/UK or ROW)

This is my first collection of poetry to be published, although various poems have appeared in publications and on websites over the years. It's split into two sections - the first is social commentary and poems on urban life, The second section is entirely devoted to nature.

The title and the cover were inspired by my accidentally stumbling across an abandoned development in Wexford that had become overgrown with weeds. Luckily I had my camera with me and I was able to capture some stricking images, which gave the concept for the book - the contrast between the beauty and resilience of nature and the transience of urban life and human endeavours.

Published in Ireland through Kilkenny Druidry College Press, March 2016. The book is available only in paperpack for the present time. A few samples from this book are included on my poetry page.

"A personal statement straight from the heart... The first part rises from the author's response to conditions in the city - where he seems to have led a somewhat turbulent and angry existence - while the second half reflects the healing power of nature... Not always a comfortable read, these poems strike a raw note of truth on every page." Touchstone Magazine